The Irish Community in Leeds


Almost every Irish family has been touched by emigration. Since 1800 one out of every two people born on the island of Ireland has emigrated. It has been the central thread in the relationship between Ireland and the rest of the world, especially Britain. Today, the Irish Diaspora (Irish emigrants & their descendants) includes 80 million people worldwide. This is more than 13 times the current population of the island of Ireland.

Today, the Irish Diaspora (Irish emigrants & their descendants) includes 80 million people worldwide. This is more than 13 times the current population of the island of Ireland.

The Irish are the longest established and largest minority community in Britain. Four out of every five children born in Ireland between 1931 and 1941 emigrated in the 1950s with the majority crossing the Irish Sea to Britain.

By 1971 there were almost one million Irish-born persons living in Britain, and 10,000 were living in Leeds. In Britain today there are at least 1.7 million people born to Irish parents, and as many as 6 million of Irish descent.

The City of Leeds is nestled in the Aire Valley of West Yorkshire in north-central England, east of the Pennine Range. There has been a substantial Irish Community in the City for almost two centuries.

The Untold Stories website, using a combination of a documentary film, and historical narrative accompanied by more than 250 photographs, bears testament to this long-standing and vibrant community. 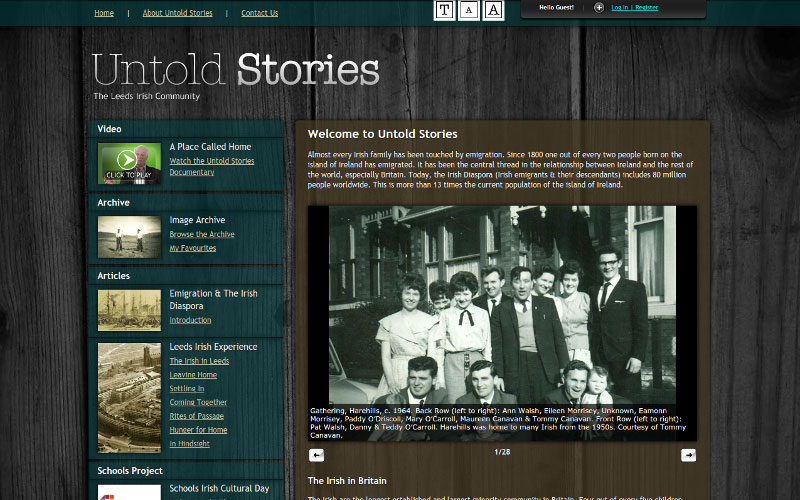