Leeds Irish Arts Foundation with the working name of Irish Arts Foundation (IAF) was established in Leeds, England in June 1998 as a Company Ltd by Guarantee (No. 4927919) and a Registered Charity (No.1101657). Its initial establishment in 1998 as Harehills Irish Music Project (the former name of the Company with the working name of Irish Music Project Leeds) was the culmination of a six- month informal consultation process with a range of different partners and practitioners across the city.

This consultation had established that there was considerable interest amongst both practitioners and arts funders and a need to see a community based Irish music and arts organisation established with the vision to deliver contemporary community based activities and events, workshops and performances and provide opportunities and support to musicians and artistes.

Irish Music Project Leeds had delivered an immense amount of activity in the areas of development and professional performances, workshops & promotion. This work mainly featured Irish traditional Music, with Irish arts as a secondary art form.

Whilst the major focus of our initial work related to traditional Irish music, increasingly the ongoing development project work became interspersed to include a broader cross section of Irish arts and culture e.g. literary, visual & drama based arts which was reflected by a renaming and re-branding to the Irish Arts Foundation (IAF) in 2006.

Established in 2007, Irish History Month was previously a single member wholly owned subsidiary company of IAF. It is now integrated within our Community Participation and Learning Programme.

IAF has undertaken this programme of organisational change and development, which has involved the implementation of two five-year Strategic Development Plans. These plans provided significant guidance for programmes of activities and methods of delivery.

These developments also re-invigorated the organisation internally and has sent out a positive message about IAF‟s strong organisational will to thrive for many years to come These important changes formed the beginning of a new stage in IAF‟s life in which an ongoing vision for the organisation has developed, of which our 2019-2023 Strategic Development Plan will play a similar key role.

Irish Arts Foundation have been awarded level one PQASSO (Practical Quality Assurance System for Small Organisations) accreditation. The PQASSO Quality Mark is endorsed by the Charity Commission and more formally evidences to our funders and other stakeholders that we are demonstrating and further developing the running of an effective charity.

We'll keep you informed with info on future events and projects. You can opt-out at any time.

We'll be in touch very soon. 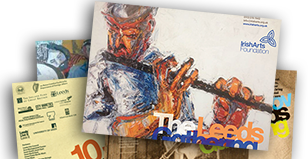